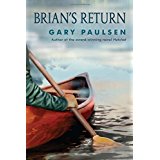 Brian Robeson was lost in the wilderness and survived for weeks when the pilot of the plane he was in had a heart attack and died.  Now Brian is back at home and cannot make sense of his life in high school.  He feels out of it.  More isolated than he did in the woods when he was alone.  He makes up his mind to go back into the woods where he was at one with nature.

His adventures are slightly different because he came prepared for almost anything he could think of happening on this trip.  Then he remembered the most important thing about living in the wilderness - expect the unexpected.  He encountered a gully washer of an overnight rainstorm, a frightened young doe who tipped over his canoe, a small bear who was protecting his territory, a band of wolves who invaded his camp at night, and a stranger who came to share his campfire one night.

Overall, Brian's return to the wilderness was not necessarily as hazardous as his first adventure, but he did have to contend with some of the same things.  He first dealt with death, a tornado, mosquitoes, and near starvation.  This time was not quite so bad, but he realized that life in the wilderness is always going to be unexpected.  You can never predict nature.

Posted by serolod at 6:37 AM No comments: 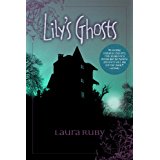 Moving to a new place is a traumatic experience for a young girl.  What would make it even more traumatic?  A beach full of ghosts, maybe.  Lily and her mother have fallen on hard times.  They move to her Great Uncle's house in Cape May, New Jersey, just until they get back on their feet.

Lily was home schooled so she really didn't know anyone.  One day she met a cute boy, Vaz.  She began hanging around with him when her mother was at work.  Mysterious things begin happening to her in and around the house, mysterious phone calls (no one is there), things disappear and reappear in strange places,  her shampoo has red dye in it and turns her hair pink.  But other than the fact that her cat, Julep, is always looking at the chandelier in the living room, she sees nothing unusual.

All these thing take Lily and Vaz into a mysterious adventure involving a lost treasure, a fake medium, and all those ghosts, who are of various size, shape, and disposition.  The ghosts were a jelly belly man and his wife who were killed on their way to the beach 23 years ago, a girl of 13 years who drowned in a wool dress and pantaloons in 1909, A Lenape Indian who died in a skirmish with Dutch Settlers in 1644, Lola, a burgeoning actress who was found dead on the stage of her high school, The Human Candle (who we later find out is Uncle Max), and a pirate who really wasn't a ghost.

This book was a good find in the library where I work.  I was looking for books to fill my summer reading while off from teaching when I came across this cute little book.  I have since suggested it to many young girls to read and they also loved it.  It has just enough suspense to make it exciting and enough romance to make it interesting.  Pick up a book and look at the cover.  Don't judge the contents by the cover, just turn it over and look and what it contains.  You can always put it down if it doesn't grab you quickly. 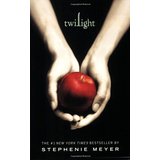 This book has recently been on the most Challenged List. (Vampires)

Exposition: The main characters in this story are Bella Swan, Edward Cullen, Charlie Swan, Edward's family, and the kids at school. The story takes place in Forks, Washington.  The story begins with Bella coming to live with her father.

Conflict:  Bella meets Edward and he acts like he can't stand to be around her.  She is definately drawn to him and his beauty.

Rising Action:  Forever a clutz, Bella could do worse than to fall in love with Edward.  His family is wealthy and his father is a doctor.  After talking to an old family friend, she realizes that Edward and his family are all vampires.  She also finds out that they are not living off of human blood. They hunt animal blood in the mountains.  She has to contend with hostility from Edward's family.

Climax:  She is in dire danger when James, Victoria and Laurent, three visiting vampires, begin to hunt her.  She is taken to Phoenix to get away from James but he finds her anyway.  Her life was almost over.

Falling Action:  Edward and Emmett, his brother, find Bella just in time to save her and kill James.  She returns to Forks with multiple stitches, broken ribs, and a broken leg.  Edward takes her to the prom.

Resolution:  Edward promises to stay as long as she needs him but her insistance that he make her a full vampire has angered him.  He feels that because of him her life is in grave danger.

Twilight is one of those books that you can't put down once you begin to read them.  The suspense keeps growing and doesn't stop.  I had to read the second book before I could consider reading anything else.

Posted by serolod at 7:17 AM No comments:

A Sick Day for Amos McGee 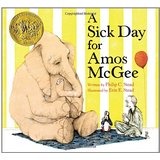 The book is a Caldecott Winner from 2010.

Exposition:  The main characters are Amos McGee and the animals he cares for in the zoo.

Conflict:  Amos was the favorite worker of all those who helped care for the animals.  The problem arose when Amos didn’t come to work one day.

Rising Action:  Amos would go through the same routine every day, get up, get dressed, eat his breakfast,  get on the number 5 bus and visit with the animals at the zoo while he helped care for them.  He played chess with the elephant, ran races with the turtle, sat with the very shy penguin, helped the rhino with his runny nose and read to the owl.

Climax:  The routine never changed so when he did not show up for work one day, the animals decided to look for him.  They found him at home in his bed sick with a cold.

Falling Action:  The animals did for him what he had done for them every day.  The elephant set up the chess board, the turtle played hide and seek with him because he didn’t feel like running, the penguin sat on his feet to keep them warm, and the rhino was ready to offer a hanky when he needed one .

Resolution:  Amos began to feel better so he suggested tea and a good night’s sleep so they could catch the early bus back to the zoo the next morning.  Owl read them all a story before they went to sleep.

This book is illustrated really cute.  I am not acquainted with Erin Stead as an illustrator, but her drawings were excellent.  They fit the story perfectly.  My favorite was the way the elephant sat on the stool and the floor.  How did he ever get up?
Posted by serolod at 1:28 PM No comments:

The Lion and the Mouse 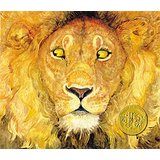 This book won the Caldecott Medal in 2010.

Exposition:  The main characters are a timid little field mouse and a very large lion who live on the Savannah of Africa.

Conflict:  The very small field mouse has many enemies wanting to eat him but his largest enemy is the lion.

Rising Action:  At a strategic point in the story, the lion catches the mouse but the lion decides he is not very hungry.  On impulse the lion sets the mouse free.

Climax:  Later the lion is snared in a net and cannot get free.  He roars very loudly and the mouse hears his plea for help.

Falling Action:  The small mouse comes to the lions rescue and chews the ropes on the net allowing the lion to fall to the ground free yet again.  As a result of his actions earlier, the lion is spared capture by the tiny little morsel that would not have sated his voracious appetite.

Resolution:  The resolution of the story is also a moral.  Do not bite the mouse that can save you.

Jerry Pinkney has been one of my favorite illustrators for a very long time.  Caldecott Books are widely known for their excellence in illustrations and the book rightly deserves the award.  The book was very cleverly and carefully drawn to show each frame of the story sequentially, tracing the antics of the mouse up to and including his capture by the lion and continues through the “pay it forward” by the mouse.

The book has a lot of imagery to show how the mouse must cover a lot of ground to get from one place to another and the lion can get there very quickly.
Posted by serolod at 1:27 PM No comments: 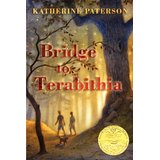 Exposition:  Jesse Aarons lives with his family of 4 sisters and his parents on a small farm outside of town with no neighbors nearby until the Burke family moves in the house down the road.  Leslie Burke is a girl and at their first meeting Jesse doesn’t seem to like her.
Conflict:  Leslie wins the race that Jesse was determined to win.  He tries to hate her but she wins him over by sheer determination. The pair is picked on by the older, bigger kids and try to stick together. After school one day, they cross a dry creek bed on a rope to investigate what was on the other side.  It becomes their new kingdom, “Terabithia” where Jesse and Leslie become the rulers.  Almost everything in the kingdom is formed in Leslie’s mind.  Every day after school they swing into their own little world where they are in charge and they can leave the outside world and all their troubles behind.
Rising Action: The story begins to build when many days of rain fills the creek to overflowing.  Leslie is not afraid to go across on the rope but Jesse is terrified.  He decides not to go one Saturday morning and when his teacher, Miss Edmonds, calls to ask if he can go to the Smithsonian Museum.  He asks his sleeping mother if he can go and she agrees.  He has a wonderful time seeing the exhibits and returns home to find that his family has been frantically searching for him all day.

Climax:  Leslie went to “Terabithia” without him and fell into the creek and drowned.
Falling Action:  Jesse can’t comprehend that she is gone and doesn’t believe it either.  His parents go to visit the Burke family with all of their relatives there and he crumbles, yelling and screaming at them that she isn’t dead.  He feels so bad that he left her behind when he could have asked her to go along.
Resolution: Leslie’s family decides to move away because of her death.  They do not blame Jesse for anything that happened to Leslie but Jesse feels he must apologize to them for not being there for her. They are grateful for his friendship to her because she didn’t make friends easily.  He then allows his sister, May Belle, to go to “Terabithia” with him.

Literary Elements:
Bridge to Terabithia is a John Newbery Medal winner and has also been on the most challenged book list.

Posted by serolod at 1:26 PM No comments: